"The time has come," the Chair then said,
"To talk of future plans:
Of guests--events--and costumed folk
--Of Discworld Cons--and fans--
And why the Chair is always knurd(!)--
And who might run programs."

Well, NADWCon2011 has now come to a close, and all of us are (hopefully) home and recovering from all of the excitement and fun! I hope that everyone who attended the con had as great a time as I did, and from all reports I've heard, that seems to be the case! But then, what else could be expected after another successful Discworld convention? Amazing guests were featured; exciting programs, workshops, and games were enacted; old friends were reunited; new friends were made; inventive adventures were had; fascinating things were learned and discussed; costumes were admired; drinks were consumed; lively and hilarious conversations filled the air; and all manner of silliness was enacted in the name of Discworld -and that’s just as it should be!

It's hard to believe it's been six years now since I first attended a Terry Pratchett book signing and Q & A in Arlington, VA, and innocently asked Terry whether he'd come to a North American Discworld Convention if we made one happen. It's even more hard to believe, sometimes, that he said: "Absolutely!" and that two fantastic, fun-filled conventions have now taken place! But the memories, the photos, and the uniquely Discworld Convention souvenirs (Petite Quirmignon Cow! Petite Quirmignon Cow!) remind me that this is, indeed, the case.

As a co-founder of The North American Discworld Convention; as Vice Chair, Webmaster, Online Publicity Coordinator, Pre-Con Programming Coordinator, and at-con Guest Liaison for NADWCon2009; as Chair of The NADWCon Guild of Chelonavigators convention steering committee; and as Guest Liaison Co-Coordinator and Convention Advisor, and later Chair of NADWCon2011, it's been a fantastic and sometimes slightly terrifying adventure -and one that I am very proud to have been a part of. It's been a privilege to work with Terry, our other amazing guests, and all of the wonderful and talented people who have been a part of making each of the NADWCon events happen, and to witness such amazing contributions, dedication, and hard work from the Honored Guests, convention committees, staff, program participants, and volunteers. I am honored by the confidence that was placed in me and the other fans by Sir Terry and all who attended the conventions, throughout the process of putting these events on in proper Discworld style; and touched by the support and goodwill that has been extended towards myself and the rest of the convention organizers over the years. I am also very honored to have received such a high public accolade as that of being made a Dame of Discworld, and will try to do the title proud (and only show off my bloomers on very special occasions!).

It probably does not need to be said, but I shall say anyway, that I love the Discworld, Sir Terry, the convention guests, the conventions, and the fans, both those who have worked hard to help make these conventions happen, and those who have come to attend and enjoy. The fictional world Terry has created, and the very real community that has been formed around it, are entities unlike any other, and are a very important part of my life.

However, there sometimes comes a time when one must shift the focus of one’s attention and time, and I feel that after six years of volunteering my time to work on the NADWCons, I must now take a hiatus from convention organizing, and focus more intensely on my health (post eye-surgeries), and my career and other commitments. I truly wish there was time for me to do everything, but unfortunately my practical side knows that is not the case.

I also know that there are many fans eager to see another NADWCon in 2013, and willing to work to make it happen, to which I say: Hurrah! I will be very glad to see the NADWCon tradition being continued, and will do my best to pass along any knowledge or wisdom (haha!) that I might have gained through my work on the 2009 and 2011 cons and on the Steering Committee. I must admit that I am quite looking forward to the prospect of attending future NADWCons, and finally having the chance to see and enjoy them from “the other side.” If there is to be another NADWCon, I certainly plan to be there (probably in costume!) and look forward to seeing all of my Discworld friends again both at that and at other Discworld events!

And now, all that remains is for me to say a gigantic thank you and congratulations to everyone who has been or will be involved in the NADWCons! And to Sir Terry Pratchett, without whom Roundworld just would not be the same.

Much love and many hugs to Sir Terry, and to all who love Discworld as much as I do. 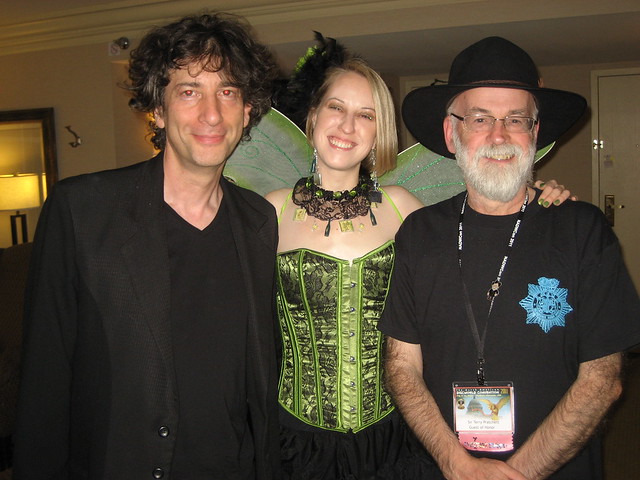