Yesterday was a hectic day for me. A friend's mother passed away, I had the NPC new members' lunch, my office was all crazy because everyone's into March Madness, and then I went out with another friend to this Smithsonian club night thing at the Postal Museum. Whew!

The Press Club lunch was fantastic. Not only is the food yummy (yay!) at The Fourth Estate, but the new members and the Board of Governors member and recruiting director who were there were all really nice and fascinating to talk to, we got a tour of the club, and I can just see all this...potential...in my membership with them. So it's very exciting! (And not just because they have complimentary breakfasts every morning and taco dinners every Friday night, although that is pretty exciting too. Hee.) I also see ways I could maybe help out, so I'm looking into that. I like to be involved.

March Madness is being fun so far - I don't know anything about how to pick a bracket, so I went for "whichever names I like best and gut instinct" to pick, just for the hell of it, and so far I'm actually doing about as well as most and better than some. Heh. We'll see what Monday brings (forgot to check today and my bracket's at the office).

The Smithsonian thing was pretty darned cool. I got there a little late so I missed Meg, who was volunteering, but she or someone had written on the inside of my wristband, "Meg and Marshall's friend!" Hee! So that was nice. :) They set up drinks and snacks on two levels, with a DJ and dance floor on the upper level. The first DJ wasn't as exciting, playing some more French/Euro club music, I think, that wasn't that fun to dance to. But then they started playing more fun stuff (in my opinion) so we had a good time dancing. SADLY it closed at 1, so by 12:45 they were herding people out. I called Phil to see if he was out, because I wanted to keep dancing, and of course he was (he always is) but IN OHIO. Boo, Phil. Next time, BE MORE HELPFUL. (Just kidding! :)

I took a few pics, but just on my cell phone, which is pretty good, but not that good. Especially in the darrrrrk.

Lower level of the "club" 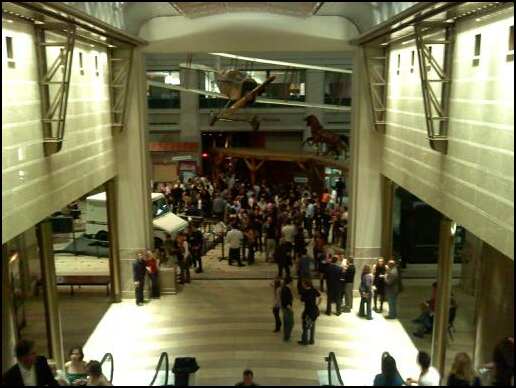 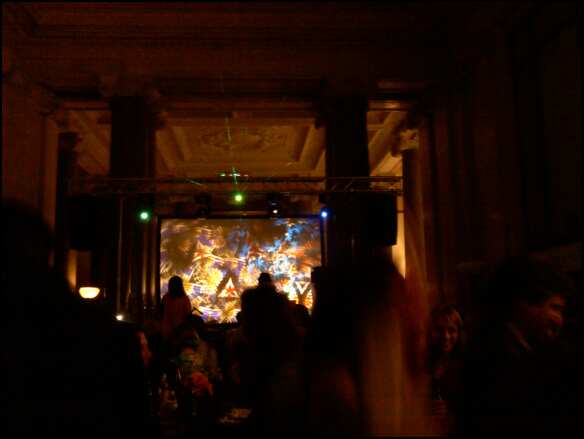 Today, I went to work (making up lost time due to back problems) and then got together with my friend Joe, who I haven't hung out with in a couple of years or more. We ran into each other at Thanksgiving, in the NJ train station of all places, and it turns out he's moved down this way from NJ. So he and some friends were in the city for an exhibit, and I ended up hanging out with him and his friend Anne for awhile. We got yogurt at the yogurt place that's in the building I used to walk by every day a couple of years ago and think, "I wish someone would renovate that nice old building and use it." And now they have. Woo! (It's a neat older building with little squares of tan and purple stained glass in the upper windows. <3 I don't know why I like it so much, though. I just do.) We walked to the Washington Monument after yogurt (and touched it - you have to touch it if you go all the way up to it! It's a rule! Of mine, anyway) and looked waaaaaaay up at it and got dizzy. Good times! Heh. So that was fun.

And now...I have to go in to work again tomorrow. Boo. But hey, at least I got to have some fun anyway and it's sooooo nice out. Let's hope it stays that way.

P.S. On an unrelated note but re: a link from my last post, I have now discovered that Tilda Swinton's new fragrance (Like This) will be available in NYC in June. I must try this.
Collapse